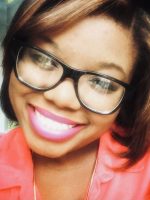 She holds fast to Isaiah 43:19, “See, I am doing a new thing! Now it springs up; do you not perceive it? I am making a way in the wilderness and streams in the wasteland.” God is getting ready to do a new thing, something we have never seen before; stay prayed up and get ready!